NEED HELP DECIDING IF VERTICAL ARE RIGHT FOR YOU?

Vertical blinds have only been around for a few decades, and up until recently they had not achieved nearly as much popularity as their horizontal counterparts. Some of our customers choose them for style, incorporating vertical blinds in rooms decorated in the modern style. Others choose vertical blinds, which are typically installed using a headrail that sits above the door or window frame, for simple convenience. After all, can you imagine a better treatment for sliding glass doors, which have become so popular in our homes? Treat this guide as a comprehensive view of the things each homeowner must consider when shopping for vertical blinds, and then give us a call when you are ready to take that next step!

Vertical blinds are known for bringing a neat and simple energy into a room, and for this reason their rise in popularity has rise hand-in-hand with that of modern or contemporary homes, which are typically decorated with an eye toward the entire space, and not just one or two individual pieces or decorations that draw attention. They are also known to make a room “feel” taller, and for this reason they are common to large dens and living rooms where many family members might gather.

Other considerations around fashion include the direction of the draw and slat design. Vertical blinds are typically operated with a thin pole used to pull the individual blinds along a track. If all the blinds end up to one side when they are opened, that is called a one-way draw. In split draw models, half of the blinds open to the left while the others open to the right, creating a display that is more symmetrical and impressive, according to many design critics. In a similar way, not all vertical blinds are designed to hand straight down from their headrails. “S-Curve” models are crafted so that their appearance resembles that of drapes with their turns and folds, more than it does a typical blind. 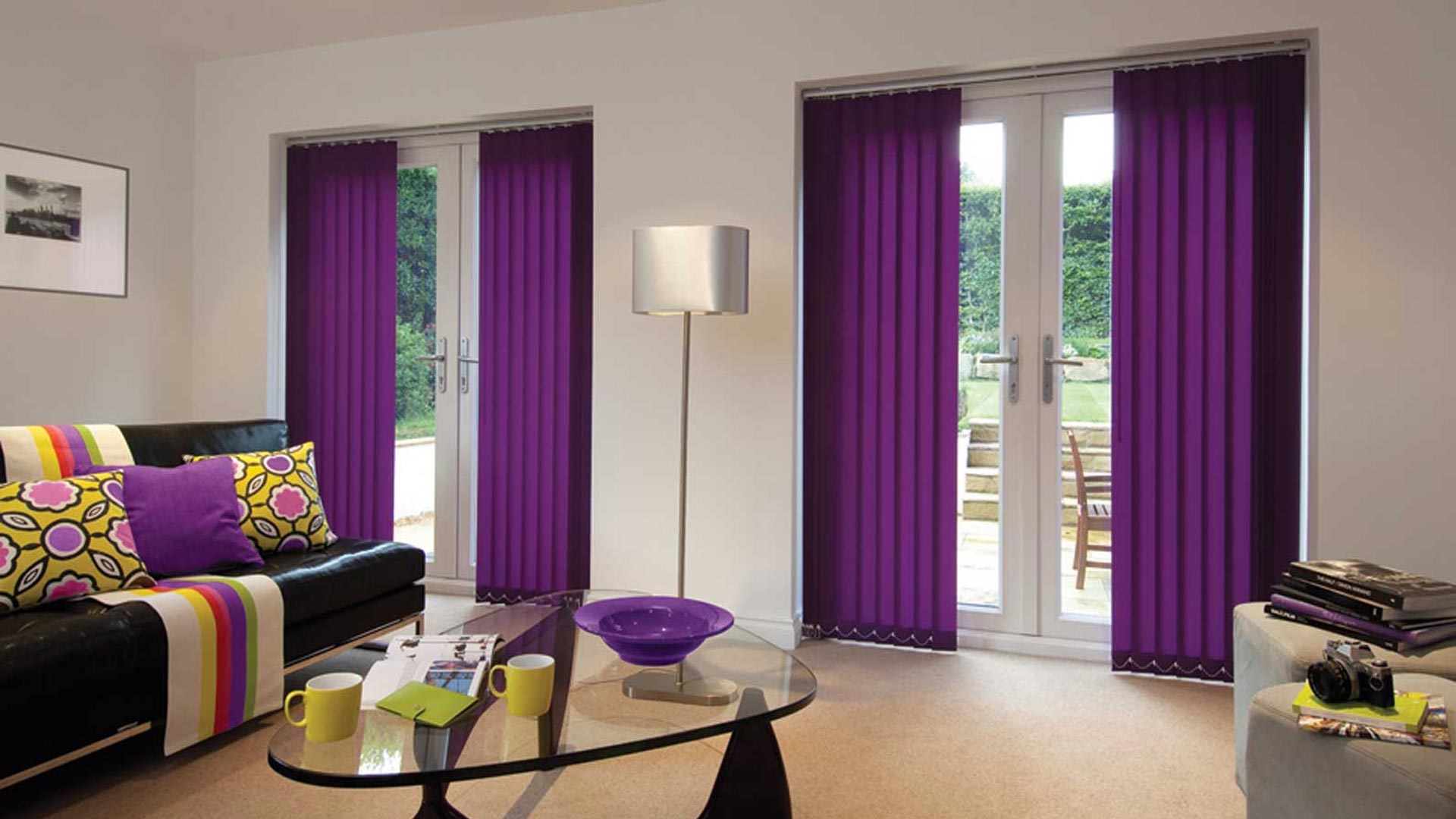 While there are some differences, most vertical blinds are installed using a fixed headrail on the inside or outside of the frame of the door or window. In our experience, when it comes to fitting vertical blinds, correctly measuring their height is critical. Not measuring correctly can lead to blinds that are too long and drag on the floor, or blinds that are too short and leave awkward spaces to peek through into the yard. We recommend that our customers leave a half inch of space between the bottom of each blind and the ground to avoid both issues.

When it comes to the width of each individual slat, the general rule is the wider the door or window frame, the wider the blinds must be to get maximum coverage. In other words, if they are not wide enough, the blinds will leave unwanted spaces in between one another when closed. Finally, we recommend that when mounting vertical blinds on the outside of a door frame, our customers leave six inches to the right and to the left to ensure maximum coverage. 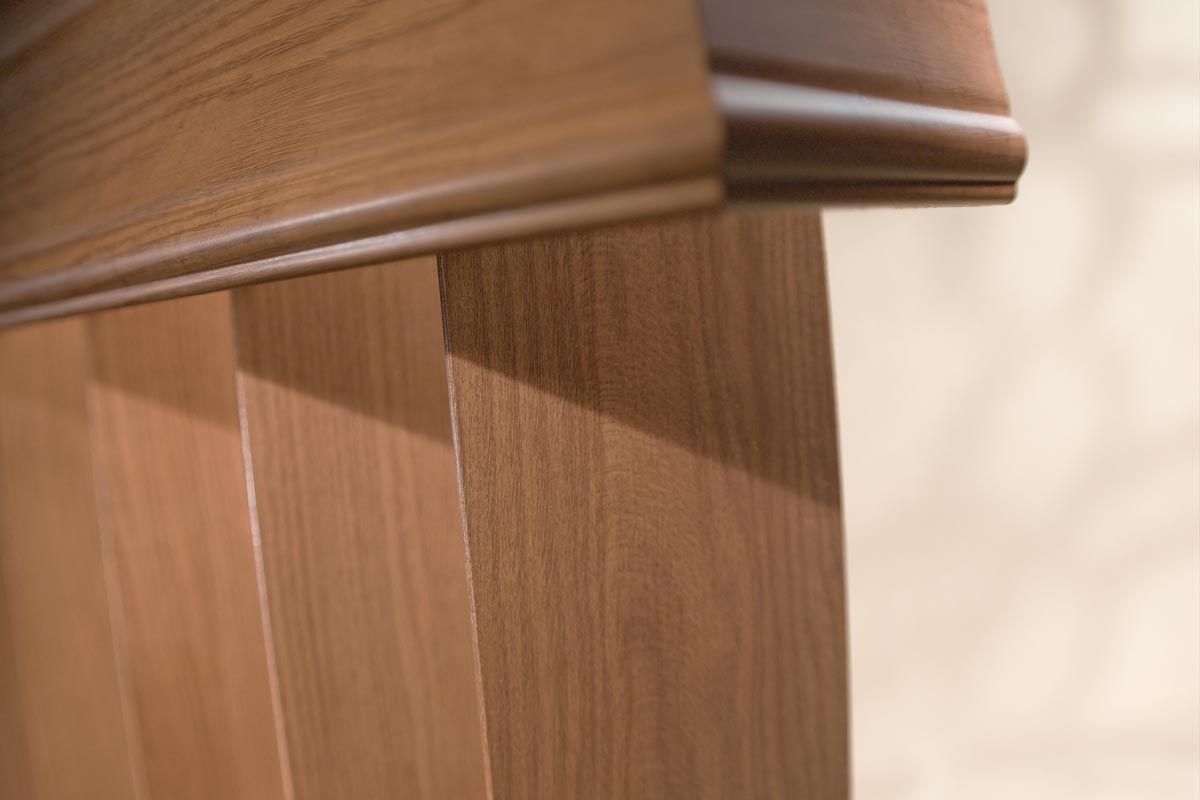 As with most window treatments, vertical blinds are made from a variety of different materials, and each one comes with its own costs and benefits. Vertical blinds made from vinyl and aluminum are on the cheaper side, costing around fifty dollars to treat each door or window. Vinyl vertical blinds come standard in many homes as they are durable and match well with just about any style, but many of our customers consider them to be too simple compared with those made from other materials. Aluminum vertical blinds share many of the same qualities- they last, but simply do not “pop”. An added feature of any aluminum blinds is that they are more resistant to rust than their vinyl counterparts. According to the folks at Blinds Chalet, aluminum blinds develop a coating with a chemical called aluminum oxide, making them the perfect choice in areas like the kitchen where moisture is more prevalent.

Wood and faux wood vertical blinds are becoming more popular with our customers because of the natural, buoyant energy that they can bring to a room. While the faux wood styles have only gotten more realistic over the years, most agree that they do not exactly replicate the hues of natural wood, especially in the presence of sunlight. It is much easier to clean faux wood blinds, however, and they are much more resistant to moisture. Something to consider! Authentic wood vertical blinds cost between one and two hundred dollars per treatment.

Finally, vertical blinds made from various fabrics are commonly touted for their versatility- one model might be made from a fabric type that is largely transparent, offering privacy and natural light all at once, while another model might prevent light from entering the home almost entirely. These models are typically referred to as blackout vertical blinds and can cost upwards of one hundred dollars per treatment, depending on the quality of the fabrics used. We find that our customers who choose fabric vertical blinds do so with preference in mind, and not their cost. This writeup from Barlow Blinds details the different fabrics that one might encounter when shopping for vertical blinds, listing the benefits and drawbacks of each one!

One of the major advantages around vertical blinds is that in most cases, it is not necessary to remove them to clean them. Dust can be removed with a cloth, or better yet with a specialized vacuum attachment (see our article on cleaning blinds and shades for more information) made for dusting. Attack stains on vertical blinds by wiping gently with a soft cloth and soapy water, and please consider using a microfiber cloth! They are made from a softer material that prevents tiny scratches from building up on your blinds over time. If the stain is too difficult, you can always make an appointment with our reliable and experienced window treatment cleaning service ( link ) .

We now pronounce you an expert in vertical blinds! And we hope that armed with this information, you are one or two steps closer to utilizing this wonderful treatment for a sliding door or large window in your own home.